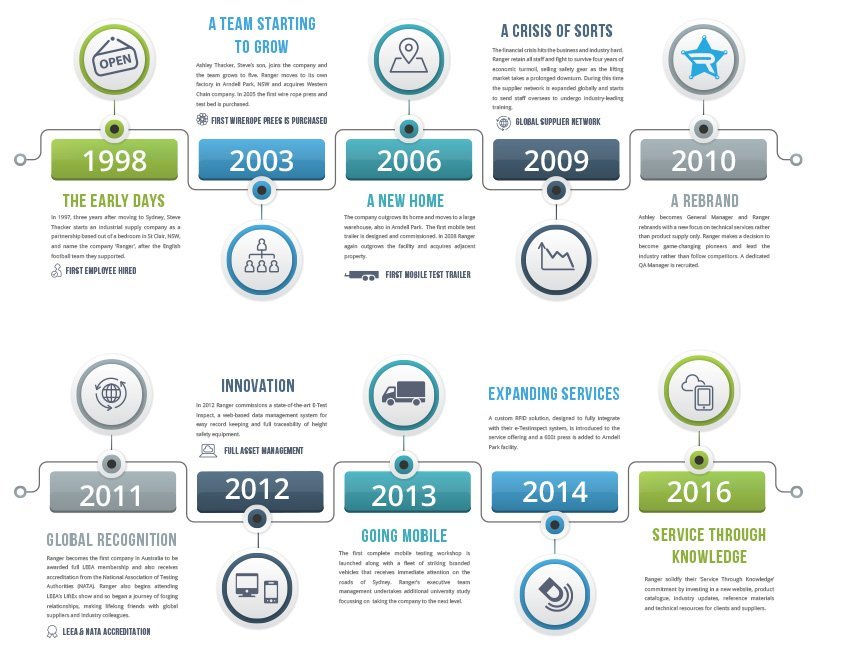 Next year marks 20 years since my father, Steve, and his friends Brian and Shane started an industrial supply company named after their favourite football team. Even though I was only a child at the time, I often think about those early days.

“Originally our goal was to offer a one-stop-shop for everything,” Steve says when people ask him how the Ranger (yes, the team was West London-based Queens Park Rangers) journey began.

The company has transformed since, but at its core remains the ethos Service Through Knowledge—something else I remember Steve saying from a young age.

It’s hard to pick the biggest moments on our journey; they’ve all played a significant part in getting the company to where we are today. The day I became general manager in 2010 was a pretty key moment, but I guess I would say that! Steve might point to something else. Our customers may have their own favourites.

While the concept of content marketing was unknown to the company’s three QPR-supporting founders, actually, their goals back then are remarkably similar to the purpose of this blog.

It is not a commercial tool to promote the business or its products, but more an educational, knowledge-based vehicle to engage with existing and potential customers, in addition to my social media connections all over the world. My updates will package up Service Through Knowledge in a slightly different way to what the business has tried before.

Additionally, we have launched a Twitter account—@RangerLifting—where we will post content on a daily basis. Engagement with industry on LinkedIn and other platforms will continue in earnest, while trade media representatives have also been advised that they will be receiving product information, case studies and other press releases from us on a regular basis from the turn of the year.

In 2017 I’m committed to providing monthly updates on my experiences from the industry’s coalface (literally if the coal price picks up) and share information to promote ongoing improvement of best practice. As my life education and university studies continue; I visit trade shows in Australasia, South East Asia, Europe, the USA, and the rest of the world; and provide strategic leadership for the business, there should be plenty to write about.

My role requires me to keep in regular contact with clients, understand trends that impact them and incorporate their requirements back into the business. I also oversee marketing and strategy, which I feel is paramount to the success of the business. If I were to step back from the frontline and only manage operations, I would lose touch with our core business. I see some senior figures making that mistake. I want to be a business leader that is immersed in the industry. Literally up to my eyeballs in it!

I’ll frequently reference the state of the market in my posts. While I won’t give away any trade secrets, as such, I don’t see sharing as weakness. The industry would be far more advanced if people were more freely prepared to collaborate, which will be another theme of my articles. A rising tide lifts all boats, as they say.

With the coal price down, Ranger has found the construction industry to be very active. With more tower cranes currently in the skyline here in Australia than Dubai, New York and London combined, there are openings for all kinds of suppliers and other businesses. Elsewhere, although the mining, offshore, oil and gas markets are calm, there are plenty of opportunities, especially in New South Wales. Our strategy and marketing efforts over the past six years have helped us position ourselves to seize them.

Prevalent throughout the company’s timeline are references to change. Whether it is expansions, acquisitions, new equipment, new looks or a different direction, Ranger is ever evolving. The mindset has served us well and I frequently advise other business leaders to welcome opportunities to change. The companies I’ve seen struggle, particularly in the wake of financial turmoil, are the ones who’ve been slow to react or have remained too loyal to old methods.

Take 2009, for example. The financial crisis hit us and our markets hard. And I mean hard. Many sat around, waiting for a recovery that no forecaster suggested was going to happen any time soon. Others scaled down their operations and insulated themselves from the storm. We went out and braved the elements.

We focussed on safety equipment as lifting gear stopped going out the door with such regularity. We diversified. We kept moving forward. We kept our staff. It was hard but we were prepared to change. In fact, it was only after the financial crisis that we really started to look at the bigger picture and plan for the long-term future. It was almost a blessing in disguise.

Now, while we still sell safety equipment, everything is fully focussed on lifting and working at height, with a view to being the best we can possibly be in those specialised fields. Some guidance can be taken from that too. Accepting change and diversifying a business shouldn’t mean becoming a mile wide and an inch deep. Be the best at what you do and become a thought-leading pioneer where your audiences hang out. I’ll certainly be using this updates to reinforce those messages throughout 2017.

I referenced my ongoing education earlier. It has certainly taught me that learning doesn’t stop the day we leave school. I am a firm believer that education is a key component of the business. Service Through KNOWLEDGE is much more than a tagline; it’s a commitment to ensuring our team is learning something new every day.

The more one learns the more one realises how much more there is to learn! I have just completed my Executive Masters in Business Administration through the University of Wollongong and plan to continue studying into 2017 and beyond. It was great to celebrate graduation with my mum, dad and family only a few days ago!

It is challenging and time-consuming to take learning to this level, especially when there is a company to run as well, but the rewards are worth it. As the timeline shows, since 2009 we have been sending staff overseas to gather intelligence and take the industry’s leading courses. The Lifting Equipment Engineers Association (LEEA) has been integral to those efforts.

Actually, I’ve just returned from LEEA’s LiftEx show in Aberdeen, Scotland. Steve and I are frequent visitors to the show, which currently roams around the UK on an annual basis. We also went to CeMAT, in Germany; and the 21st International Oil & Gas Industry Exhibition & Conference (OSEA), in Singapore this year. I’ve recently registered to attend CONEXPO-CON/AGG in Las Vegas in March.

Some people avoid trade shows but they’re great educational experiences. As Steve says of LiftEx, in particular, we’ve made lifelong friends at the show as well as taking opportunities to network and get to know suppliers. These friendships and contacts are the lifeblood of our business. Our future success is as much in their hands as it is our own.

We became Australia’s first full member in 2011. It’s extremely important that the industry has a third party to deliver the same training content all over the world, tailored to each geography’s standards. I advise industry not to use anyone to inspect their equipment that has not been trained to the highest standards by LEEA. The association makes sure personnel and their employers are properly qualified to carry out their lifting equipment-related work.

I liked what LEEA chairman Oliver Auston said in an interview he did with the association’s magazine, The Lifting Engineer, that was distributed at LiftEx. He said: “It is the only credible source of technical and legal advice, guidance, training and support in the lifting gear industry. It is not an association for the badge collectors, but for the serious businesses committed to quality and excellence.” Well said, Oliver.

It feels like industry is slowly starting to sing from the same hymn sheet and see the importance of training. LEEA’s growing international membership—60% of it is now outside the UK—is proof of that. If you take nothing else from this post, understand that inadequate training can lead to major accidents that can cause millions of dollars worth of damage and sometimes death.