The countdown is on! 4 days to go until Ranger and the GT Falcon, driven by John Bowe and Aaron McGill, race in the Bathurst 6 Hour.

A strong performance in 2021 has the Ranger team hungry and looking for more of the same on the Mountain in ’22.  The team are in the final stages of preparation, having had a practice run out at at Eastern Creek race track two weeks ago.

John Bowe, Australian racing legend and co-driver of the GT Falcon, said he “did plenty of kilometres on the road as the GTF evolved and quite honestly I love the car! As the last performance car to leave the Ford Factory in Broadmeadows most of the cars are cosseted in garages and collections now. It’s a last frontier run for a real factory Falcon on a racetrack and will make for a fascinating race right throughout the field.”
John expects this years event will be busier than “Flinders street on a Friday night!”

Australian motor sport legend John Bowe will co pilot the Ranger GT Falcon, bringing valuable technical insight to this year’s team, as he was part of the original design and test team that manufactured the later FG Falcon GT.

“I have spent most of my life in the Ford world and a have special attachment to the Ford GT Falcon,” Bowe said.

“So, when Steve asked me to race, I had no hesitation. This will be my 36th year racing at Bathurst and it’s a terrific race- all sorts of cars competing over the weekend makes it very exciting.”

As one of Australia’s most decorated drivers, Bowe, has won national titles in open wheelers, sportscars and touring cars.

Last week at Eastern Creek test practice he stated: “I find the Rangers guys very refreshing to be involved with. I’ve known Paul Taylor for many years and have great respect for  his work and brain power. Aaron’s and my expectations are well under control however  because of the lack of intercooler which was pulled late in the factory development program unfortunately!”

“I’ve had many chances to climb that balcony at Bathurst, but this time I know we have the people and the car” McGill said.

“The Ranger team is working hard and seeing results on the track. They have invested heavily into this long-term project and JB and I intend to do all we can to deliver for Ranger Lifting & it’s clients”.

“I’ve known John Bowe for many years and witnessed his on track skills, however his ability to be fast immediately in a car he’s never seen was inspirational, matched only by his engineering skills”.

“The Falcon is probably the heaviest car in the race, and without an inter cooler for our supercharged V8, we are battling engine heat issues. A cold wet race would be the ticket for us, we both love the rain and it would be to our advantage!” 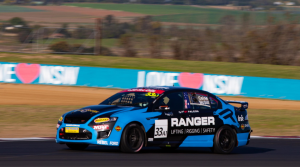 The Bathurst 6 Hour is Australia’s longest race for production cars at Mount Panorama, Bathurst, on 15-17 April, 2022.

If you want to learn more about the Bathurst 6 Hour, then click here.